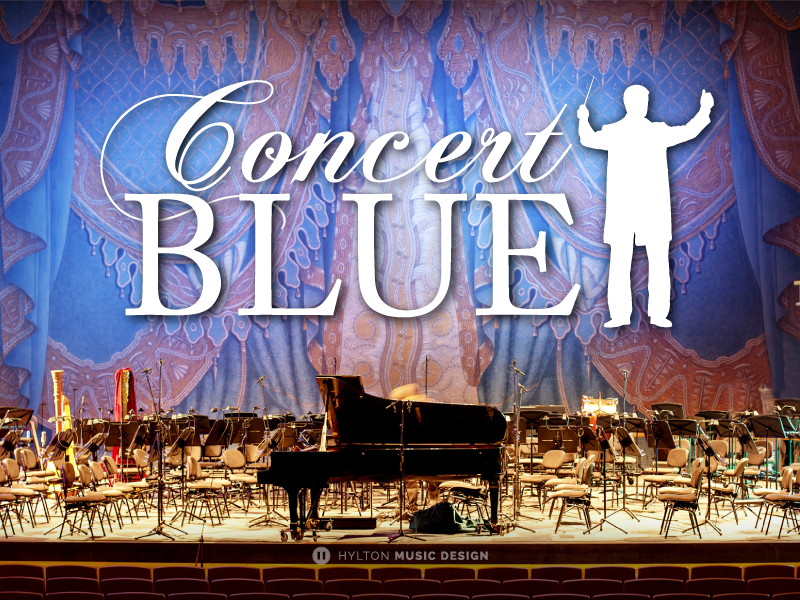 An advanced difficulty show that brings the concert hall to the field in the best of ways. Rhapsody in Blue was preserved as close to its original form as possible while creating large-scale effect moments for the field. It even includes the virtuosic solo piano parts which can be re-orchestrated for the mallets.

A deep soundscape of an orchestra warmup sets the mood in our preshow leading to the conductor baton taps and the iconic clarinet solo from Gershwin’s original. Folding chairs were utilized on the field to create an ever-changing visual landscape that focused on numerous small ensemble moments. Listen for the different brass and woodwind choirs behind the clarinet soloist that leads to our first full ensemble moment during which the entire “orchestra” arrives at their seats! Next, a virtuosic piano section, taken from the original helps us free-form transition into an energetic ragtime sounding mallet feature and onto woodwind and brass section features that utilize special techniques such as glissandos and flutter tonguing. The full ensemble climax doubles as a transition to clarinet/trumpet/trombone solos and ragtime trio with piano accompaniment. A few more climax points lead us to the end of movement one with the energetic optimism that Gershwin masterfully crafted for us.

The ballad movement begins with an intrinsically “blue” piano free-form transition moment that brings sadness to our mood and sets the stage for character interaction; but then, a beautiful woodwind soli with piano highlights lifts our spirits once again. Another sad moment follows as the trombones gliss into blueness but then depart, giving way to an uplifting full ensemble moment during which the winds are literally lifted onto their chairs to create an amazing visual effect.

Our virtuoso pianist finally begins to gain some energy and begins to riff with the battery leading to a groovy percussion feature that stops on a dime. Next, the brass have a go with a melodic feature and a triplet 8th note battle. Then, it’s the woodwinds’ turn to create a flurry of chromatic runs leading to a half-time breakdown moment with Gershwin’s melody and the infamous Rhapsody ending as the curtain drops with a textured silk flyover! The audience will be shouting “Bravo” by the end of this majestic and energetic Gershwin Masterpiece!